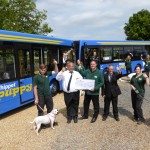 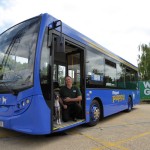 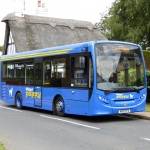 Three Whippet Puppy buses are now settling in at their new home in Swavesey, Cambridgeshire.  The buses have been acquired by Whippet Coaches from another part of Tower Transit Group, its parent company.

?Whippet Puppy buses seat 29 compared with our full-size single-deckers with up to 46 seats, ?explains Matthew Wooll, Commercial Manager. ?They are therefore ideal for a number of rural services we operate on behalf of Cambridgeshire County Council, including the 31 and 75 which have new timetables commencing on 27th July.?

The puppies were officially launched at Wood Green, The Animals Charity in Godmanchester on Thursday 16th July, thanks to the kind assistance of Richard Parris, Corporate Fundraiser.

?When we heard about Whippet?s new litter of puppies we couldn?t resist being involved in their unleashing,? said Richard. ?We often take in pregnant mums and litters of puppies or kittens, giving them the care and support they need before finding them adoring new homes so we love the idea of vehicles being given a second chance by ?rehoming? them, especially ones so young. ?

The animal rehoming centre at King?s Bush Farm in Godmanchester is the head office of Wood Green, The Animals Charity. From humble beginnings in 1924 it has grown to become one of the leading animal welfare organisations in the UK with centres throughout Herts, Beds, Cambs and London.  Thousands of animals of all shapes and sizes are taken in and rehomed each year, including chickens, rabbits, mice, guinea pigs, rats, ferrets, cats, dogs and of course whippets!

Whippet Coaches was formed five years earlier in 1919.  The business made a donation of £300 to help the charity continue their good work.

The Whippet on board the bus with RIchard Parris is Luke.